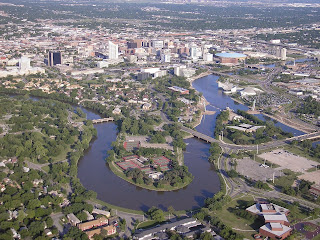 When I first expressed an interest in studying, and hopefully writing a book about, a theory of mid-sized cities for my sabbatical, I had all sorts of random ideas in mind. Then, when I finally had a chance to start pursuing those ideas in earnest, I had a somewhat clearer list of things to do. So where do things stand, here in the middle of September?

As is typical, I haven't done as much as I'd hoped--but I have been able to get some of it done. Not much writing, or much bicycling (thanks, anonymous bicycle thief back in late June!), but a good deal of reading. I have probably 10-15 books that I still want to read as part of my research, which coincides with the 10-15 weeks I have left in my sabbatical, more or less (I won't have to be back in the classroom teaching for another four months, but obviously as the spring semester draws closer I'll be drawn back into advising, syllabi-writing, and all the rest...and plus, nothing really ever gets done between Thanksgiving and New Years, anyway). What I'd like to do here--and really, I intended to start this back in August--is to jot down a series of observations and/excerpts from my larger writing project, some of which were or will hopefully become stand-alone conference papers and submission to academic journals, and some of which will just be here to remind me of points I hope to able to eventually make, when (don't say if!) that larger project becomes the book I want it to be.

So, that brings me around to my first meditation on the mid-sized city: what's with the term "mittelpolitan"? It is, for now, a title I'm playing with, or at least a term of art that I find myself relying upon more and more as I work out some of my thoughts in my head. The meaning is pretty obvious--mittel is German for "middle" (but also, interesting, for "means" or "way"), while politan has the same derivation as metropolitan or cosmopolitan: it's a reference to the "polis," or the city. So perhaps it can be read as playing on the idea of a mid-sized "way" for cities, or of the "tools" for cities of a middling size. But beyond the play, there is, I think, an actual need for some new nomenclature here.

The U.S. Census, in tabulating where the people of the United States live, makes two primary distinctions: urban and rural. Urban America is then broken down again, into "Urbanized Areas" (UAs), where 50,000 or more people live in a designated census block, or "Urban Clusters" (UCs), where you have 2500 to 50,000 people living. Any designated block with less than 2500 residents is "Rural." (Whether the small cities or ex-urban areas that constitute those UCs ought to be included in the popular understanding of "rural" is an abiding demographic dispute.) Still, while small towns and rural counties are fascinating subjects all their own (after all, they are what theoretically give us the agrarian "villages" that are posed in our imagination against industrialized "cities"), my interest is with cities of a certain size--certainly larger than 50,000 people.

So we dig further into the data. The Census Bureau and the U.S. Office of Management and Budget maintain lengthy lists of all America's UAs, and provides delineations that identify those UAs as either Metropolitan or Micropolitan Statistical Areas. The agreed upon demarcations is that if the Core Based Statistical Area (CBSA) consists of a UC of over 10,000 people, but less than 50,000, it counts as "Micropolitan"; if it is a UA of 50,000 or more, it becomes "Metropolitan." Of course, there are all sorts of ways in which the latter term is used in culture and popular discourse, far beyond its statistical definition; once referring to the "mother city" of an urbanized area of any population, to be labeled (or to simply be) "metropolitan" today has associations that take us into the conceptual realm of cosmopolitanism, travel, trade, wealth, access, reach, influence, sophistication, and so forth. Those conceptions have an effect on our thinking that any theory of how cities of a middling sized are governed or made sustainable needs to take into consideration--but we to be able to distinguish cities conceptually beyond the metropolitan level, because the increasing power of (and increasing attention paid to) the metropolises at the top of that list can skew our perspective entirely.

Warren Magnusson observes in his thoughtful book Politics of Urbanism that "modern life is urban," and that therefore, predictably, "rural life is becoming more and more like urban life." By the same token, globalization and the continual unfolding of modernization is causing urban life--as we conceive of it intellectually and develop policies for it politically, anyway--to be constantly scaled up, towards the "global cities" or "megacities" or other instances of urban agglomeration which achieve primary due to their concentration of, as Mark Abrahamson puts it in Global Cities, "jobs and investment funds" (primarily, anyway; government, educational, and religious centers also matter). Looking at the scholarly study of the 21st-century transformation and rising importance of urban life, you see this scaling-up constantly assumed. Three recent books (Benjamin Barber's If Mayors Ruled the World, Daniel Bell and Avner de-Shalit's The Spirit of Cities, and Bruce Katz and Jennifer Bradley's The Metropolitan Revolution, all of which argue for the idea that, in the near future, it is city governments rather that states which can and will do the most to develop the sort of interconnected identities and shared resources necessary to address global problems) look at numerous cities as part of their reflections--and the arguments they advance are, I think, for the most part fascinating and even important. However, almost without exception, the cities they look huge, with populations in the millions. New York City, Seoul, Montreal, Beijing, Denver, Bogata, Paris, Singapore, Houston, Palermo, Berlin, Singapore, Delhi--with the single outlier of Oxford (population of around 150,000), the smallest cities any of them consider (places like Stuttgart or Cleveland) are themselves major metropolitan areas. Clearly, to speak of cities of a certain size today, and work against the current which seemingly pulls all urban life towards great conurbations, will require some clear distinctions.

For my purposes, I'm looking at two things: first, cities between the micro- and (dominant) macro- divisions, perhaps from 50,000 to 500,000 in population; and second, cities that are separate enough, environmentally and spatially, to not be subject to any (and not to the source themselves of any extensive) sprawling or direct agglomeration. And this does, in fact, describe many hundreds of cities around the United States (such as Abilene, TX, Ames, IA, Anchorage, AK, Ann Arbor, MI, Appleton, WI, Auburn, AL, just to run through a few of the As), not to mention thousands of similar cities around the globe. What to call this distinct group? I thought about "mid-metropolitan" for a while, but ultimately decided that was clumsy. "Mittelpolitan," though, is not. The idea is to capture and theorize about that particular moment in a city's growth and development (a "moment" that may, depending on numerous demographic, environmental, and economic factors, sustain itself for decades) when it is surely not a micropolitan urban cluster--that is, it has grown beyond and achieved sufficient remove from any natural or agrarian environmental basis to be anything like "rural"--but neither is it an extensive metropolitan urbanized area--that is, it has not yet, and perhaps never will, for any number of cultural or political or historical reasons, attract the level of financial investment and consequent employment opportunities which would enable it to sustain a population of may hundreds of thousands of people, much less millions. I said before that we have a well established theoretical language for thinking about governance and sustainability in the hypothetical rural, agrarian, republican village, as well as in the ideally urbanized, cosmopolitan, liberal city. The small town or city, the urban cluster which serves rural areas, may or may be distinct from that former type of language; what I want to argue is that the mid-sized city has, or at least deserves, a mittelpolitan theory which is, if obviously not wholly original, than at least distinctly (perhaps even statistically!) its own.

What is that theory, specifically? I don't know yet--but as I said at the beginning, I have some ideas. Stay tuned.
- September 18, 2014