Mid-Size Meditations #2: The Range of the Mittelpolitan 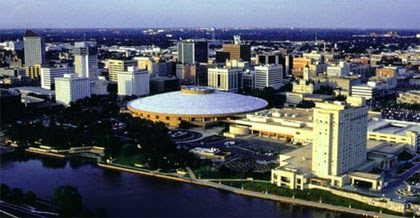 So, following up on my initial posting on Friday, I've received some good feedback (particularly from Doug Merrill of Fistful of Euros, Matt Lister, and my old friend Rob Perkins) about how I'm hoping to define--and thus get a both a conceptual and an empirical hold on--my research topic. Specifically, do to the admittedly arbitrary delineations I mentioned yesterday (cities roughly in the 50,000 to 500,000 person range, and cities without any significant sprawl into or agglomeration of adjacent urban clusters) actually fit the communities I want to look at and theorize about? Would other delineations work better?

My first response is simply to say: yeah, probably. I'm not a trained geographer or demographer or statistician, and I'd like to think the real value of what I have to say comes in the substance of the ideas about governance, identity, and sustainability which I hope to advance; I really don't expect to be able to develop a quantitatively rigorous enough model--derived from population trends, land use, state laws, and more--to get the U.S. Census Bureau to change the way it does things. Still, I need some foundation to work from and refer to, so perhaps some of following information will provide some scope to the context of my arguments.

This pdf from the Census Bureau lists the population of all the micropolitan and metropolitan regions in the United States, as of both 2000 and 2010. Altogether, it counts all the residents of the 3573 recorded urban areas in the U.S., the great majority of which are urban clusters in otherwise rural census tracks. By census-reckoning, out of all the urban spaces in the U.S., there are fully 381 which count as "metropolitan statistical areas"--that is, they have a population greater than 50,000 people in their core area. The majority of those urban core areas are single, distinct cities; even when there is clearly some communal divisions within the individual listings, it is usually only the largest ones (like "Los Angeles-Long Beach-Anaheim, CA" or "Washington-Arlington-Alexandria, DC-VA-MD-WV") that present those agglomerated divisions directly. (Hence my home city of Wichita is simply the "Wichita" metropolitan statistical area, even though that four country area actually connects over 50 separate--usually tiny--municipalities.) With a different skill set and access to more current and detailed reports, I might choose to crunch different data sets to provide the raw material for my delineations; still, this strikes me as a a good enough baseline to build upon. Here's how it breaks down:


Given my interest is smaller or mid-sized cities, I arranged the metropolitan areas beginning at the bottom boundary of 50,000 residents, below which the Census Bureau and Office of Management and Budget defines an urban area as micropolitan rather than metro. After that, seemed logical to follow the growth patters which overall census data confirms (namely, that America's urban areas are growing larger and more concentrated, with people moving out of rural areas and urban clusters and into fully urbanized areas) and distinguish metropolitan statistical areas as they doubled in size, up to 100K, then 200K, then 400K, then 800K, and then anything 800K and above.

This obviously gives a skewed portrait of the range of American cities (in that final category you would find cities from 800,000 people to ten times that size, and surely the differences between them are massive), but I think it is suggesting larger "mittelpolitan" patterns. In particular, the fact that the middle range of this significant sweep of urban growth and contraction has remained fairly constant--with, of course, a number of cities growing into that category from the first, and others expanding beyond it--implies that there is, even assuming a progressive line of urban growth (which may or may not be true, particularly when an urban area reaches a certain population; while I did count four cases of cities whose population loss took them from the second category into the first, there were none that I found featuring a significant enough loss to go from either the third or fourth category to a lower one), some real "stickiness" to that middle range. In short, it seems reasonable to assume that while smaller cities and rural urban clusters can, under certain circumstances, relatively rapidly be catalyzed and transformed into a growing urbanized area, holding on to population, development, and economic growth up to and beyond the half-million mark is a much slower proposition. Which means, of course, that issues of sustainability and long-term governance may press upon such metropolitan areas in ways quite different from the way they perhaps would with in either 1) rural villages and towns, 2) micropolitan cities experiencing accelerated growth, or 3) metropolitan agglomerations which have entered into the top 2% of all American urban areas.

What about the population distribution amongst those urban areas--is there similarly some "stickiness" to these enduring mid-sized cities that is reflected in geography? Consider a couple of census maps. The first one charts the location of all the metropolitan and micropolitan areas in the United States, which makes it easy to imagine them all being essentially joined together, with wide rural spaces between:

But this map conceives of things slightly differently:

Focusing solely upon urbanized areas of over 50,000 residents in a single statistical area allows to see that while, obviously, there is a great deal of agglomeration in the United States, there is also, particularly across the American South, Great Plains, and Midwest, dozens of cities of significant size which stand nonetheless physically disconnected from greater urban conurbations, and thus presumably need to think about themselves as distinct entities. (This map, contrasting metropolitan urban areas and micropolitan urban clusters, makes the same point.)

The United States is relatively unique in many ways, of course, but it seems to me reasonable to assume that most technologically and economically developed states will likely reveal a similar phenomenon--the concentration of huge numbers of people in financial, industrial, and political capital cities, but a not insignificant number of others abiding in cities of significant but not globally impressive size, and working to understand and to sustain their communities, with their own set of (often shared, but also often distinctive) virtues, vices, problems and possibilities. As I said at the beginning, I'm not claiming to have mastered sufficient geographic data to be able to insist upon the creation of a new and formal statistical category of urban life. I only want to make it clear that there is some actual demographic grounding to my choice of a "mittelpolitan" site upon which I want to advance some theoretical reflections. Having laid out all this, though, I need to get on what some of those reflections may actually be.
- September 22, 2014