Mid-Sized Meditations #13: How Big Does a City Need to Be to Go Blue?

(It's been a while since I wrote one of these; nearly 2 1/2 years since I started the series, and I don't know how well the current topic fits with where my research continues to wander. But as The Wichita Eagle ran today a shortened version of some of my thoughts here, I ought to at least try to make them fit.)

Here in Wichita, KS, we have a special election coming up on April 11. The congressman from the Kansas 4th congressional district, Mike Pompeo (who, for the record, I always kind of liked as a straight-up, by-the-book, uncomplicated and unconflicted Reagan conservative) was Trump's choice to be the new director of the CIA, and that meant a replacement was needed. In February the local Republican and Democratic parties chose their candidates (the Libertarian party did as well, but for purposes of this analysis, I feel comfortable setting Chris Rockhold, who I'm sure is a perfectly nice guy, aside), and the choices were revealing--and not just in terms of political ideology. They reflect even more, I think, a shifting in how these two Kansas parties are choosing to deal with our existing political geography--or rather, how one party is arguably resisting, denying, or ignoring an important potential political shift, while the other has chosen to bet on the possibility that this shift, centered in the mid-sized city of Wichita, has a real chance of electoral success.

On the Republican side, candidate Ron Estes is the State Treasurer of Kansas, a long-time Republican politician, and a vocal supporter of Governor Brownback and President Trump (see here and here) who, in his acceptance speech last month, remembered to acknowledge every major faction in the Kansas Republican establishment: pro-life voters, small-government activists, promoters of an aggressive national defense, and more. 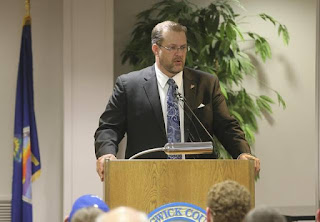 On the Democratic side, by contrast, James Thompson is a political newcomer, someone whose engagement with Democratic politics is more in line with the challenge to the Democratic establishment posed by Senator Bernie Sanders (who handily defeated Secretary Clinton in the Kansas Democratic caucus last spring, which I wrote about here). While Thompson does in some ways resemble those few Democrats that have achieved success in Kansas outside of the 2nd congressional district (that is, outside of the Kansas City-Lawrence-Topkea area) over the past 25 years--he is, for example, a military veteran who is culturally comfortable around guns, even identifying himself as a "strong 2nd Amendment man"--he departs in some important ways from the old model of Democrats like Wichita's Dan Glickman: rather than being conservative or at least quietly moderate on certain social issues, he is strongly committed to defending the rights (including reproductive rights) of women, racial minorities, and the LGBT community, as well as taking consistently progressive positions on taxation (opposing Governor Brownback's insistence that business owners not pay taxes) and poverty (promoting an increase in the minimum wage) and trade (opposing the Trans-Pacific Partnership).

So Estes is a conservative Republican and Thompson is a progressive Democrat? Perhaps--but there's more to it than that.

Note that Estes’s primary commitment is to political movements that have been constructed and taken root both nationally and state-wide. There were Republicans competing for the 4th congressional district nomination which represented a conservatism that might have dissented from elements of Brownback’s record or Trump’s agenda, but they never really threatened Estes’s level of support. Ultimately, Estes is a loyal Kansas Republican, and the Republican establishment’s endorsement of him was no surprise. He really is best understood as a creature of a state-wide, and a nation-wide, conservative party infrastructure. In a country which just elected a president on the basis of, when you come right down to it, just a half-million or fewer votes spread across the rural and exurban counties three mostly white states, a Republican candidate like Estes makes sense.


Thompson's win of the Democratic nomination, which came only after a close race against Dennis McKinney--a former state legislator and very much the model of the sort of Democrat that was once, a generation ago, frequently (if not regularly) successful in non-northeastern Kansas politics: namely, a Democrat who is culturally conservative, strongly populist , with farming roots--doesn't immediately make the same amount of sense. A political newcomer, a Wichita lawyer, a progressive Democrat, running in a district that includes (thanks to redistricting) a significant chunk of rural south-central and southwestern Kansas? Don't the Democrats need to run a well-known, electorally proven moderate or conservative to have any kind of chance? Certainly there were plenty of people around here that were saying exactly that. But the Democratic party delegates took a chance of something different--and they weren't without reason to do so, I think.

Thompson's nomination is one more small data point in an evolving Democratic party. The evolution he at least partly reflects isn't just a matter of his connection to Bernie Sanders’s failed but energizing challenge to Clinton and the Democratic party establishment. It is also reflected in the millions of protesters nation-wide (including perhaps 3000 right here in Wichita) who marched to express opposition to the misogynistic and xenophobic implications of Trump’s election. It’s reflected in the way, across the country, progressive activists are organizing around public schools, government offices, and other local institutions to mount an urban popular resistance to what they fear will come from Washington D.C. All the talk of "sanctuary cities" and "islands of blue" in the midst of conservative red states--Atlanta in Georgia, Salt Lake City in Utah, Charlotte in North Carolina, etc.--all this and more is potentially a component in what Thompson’s candidacy presents the 4th congressional district with. It is certainly a component of what got him nominated, as his support among Democratic delegates found great strength among those who applauded his extensive work as a civil rights lawyer throughout the city of Wichita.

Now, Wichita votes consistently more Republican than any of those aforementioned cities, and its urban population isn't as large or as racially diverse or as skewed towards high-tech, government, or academic-centered employment as any of theirs are either. So outside of large metro agglomerations or straight-up university towns or state capitols--which, between those three variables, explains well the persistent (though not always electorally successful) liberal base of northeastern Kansas--is the political divide between cities and their surrounding counties just not big enough to make a difference? The 4th congressional district of Kansas includes in its borders 672,000 people; all but 30,000 of those are part of Wichita's metropolitan area. Obviously many tens of thousands of those people are conservative, Republican-voting Kansans--but more of those individuals, proportionally speaking, are to be found living in Wichita's residential neighborhoods and its surrounding suburbs and bedroom communities. What about the tens of thousands of people who live in Wichita's downtown, in College Hill, in Delano, in Linwood, in Riverside, in Chisholm Creek, in Crown Heights? Lots of people who vote Republican live in those places too, of course--but might there be a chance that in those urban neighborhoods, among Wichita's African-American, Hispanic, immigrant, single, younger, and more secular populations, there could be enough progressive voters (or at least enough anti-Brownback and anti-Trump voters) to put a Democrat over the top in a district that has been Republican since Bill Clinton was president? It's a risky choice, but not just a Hail Mary pass; there is actual data regarding the changing political culture of America's cities to back it up.

In nominating Thompson, the Kansas Democratic party is watching to see if a different kind of campaign–one that balances urban issues with rural ones, and one more forthrightly connected to the interests of Kansas’s more diverse and more independent urban and suburban populations–has a chance of success. And the national Democratic party, I'm sure, will be watching too. Ever since the rise of the Occupy Movement and Black Lives Matter, ever since Sanders’s challenge to the Clinton machine, there have been questions whether a strongly progressive party might–especially given the level of support for such movements among the diverse residents of America’s cities–have a real electoral chance. It would be fascinating if Wichita, KS, rather unexpectedly, becomes one of the first real tests of that idea.
- March 02, 2017 No comments: