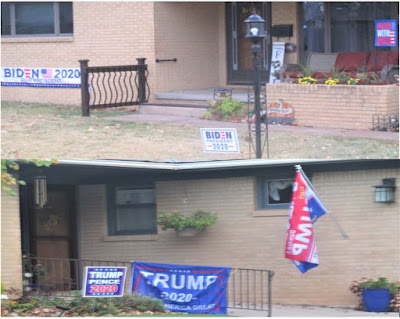 This composite image contains two scenes that I've seen nearly every day for weeks as I've walked our dog near our home here on the west side of Wichita, KS. These two homes are directly across the street from each other, with each Biden sign more or less directly facing a Trump one. I'm not sure which family put up which sign first, but I observed their numbers growing, one sign or flag or banner after another, one day or week after another, in a silent suburban struggle. (And it's continued since I took these photos; the Trump house now has five signs advertising their preferred choice for president, while the Biden house now has four signs, plus one for the Democratic candidate for U.S. Senate here in Kansas, Barbara Bollier.) I may make a point of avoiding this particular street on the day after Election Day.

Wichita isn't, of course, actually this evenly divided; while the major parties and news organizations don't spend much effort polling in any cities besides the very largest, the best and latest polling available makes it pretty clear that Trump leads Biden beyond the margin of error in Sedgwick County. True, given our city's slow but probably inevitable transformation into a more blue political body, much of that advantage is likely coming from the rural and suburban parts of the county, as opposed to districts entirely within the city itself. But that's a dive into electoral data which can wait for another time; suffice to say, for now, that Wichita remains a mostly Republican city, as Kansas remains a mostly Republican state. And as far as the particular concerns of mid-sized cities like my own is concerned, that's unfortunate.

One could easily say that I'm just emphasizing my own political preferences here, rather than objectively speaking about the particular needs or interests of Wichita, and of course I can't pretend that my (like anyone else's) political judgments aren't usually a direct outgrowth of my own (or again, like anyone else's) ideological perspective. But still, while arguments over zoning and infrastructure and urban sustainability haven't played a major role in our national elections in decades--partly because the Electoral College contributes to a rural electoral and thus rhetorical advantage in how the major parties articulate their principles--they have played a small but real role this year in defining the choice between Donald Trump and Joe Biden, and that role ought to be telling to anyone out there who just might happen to be voting for president not on the basis of Supreme Court judges, nor foreign policy, nor Russian hacking, nor tax cuts, but rather, however quaintly, simply on the basis of where they live. To live in Wichita means you live in a city facing a lot of challenges, and even if neither candidate's victory would automatically connect my city with the policy assistance and solutions it needs, at least one of them has the better message than the other, and that matters.

First, a little context. Obviously the arguments about America's cities in this terrible year of 2020 have been fierce. By and large they've been defined, on the one hand, by the urban demonstrations, protests, and violence which emerged in the wake of George Floyd's killing by the police, and on the other hand, by the ongoing struggle and backlash--complete with their own protests and demonstrations--over political authority in regards to matters of public health. To one degree or another, we've seen those arguments play out here in Wichita as well; the particular political divisions of our city, especially as we see them on the Wichita city council and the Sedgwick County commission, have reflected them.

Some commenters have seen in these arguments fault lines which are structurally dividing the huge (and overwhelmingly politically liberal) urban agglomerations from somewhat smaller, somewhat poorer, and somewhat less diverse (and also, like Wichita, somewhat more politically conservative, if not overwhelmingly so) cities; the fraught compromises which the liberal cities of America, on this reading, have been revealed in all their dangerous precarity by how their leaders have responded to protests and pandemic restrictions. Whether or not one agrees with that assessment, it is undeniable that the specific crises of 2020 are relevant to the political choices before Wichita--especially considering how fragile the finances of Wichita actually are, and how dependent its ability to respond to the medical and socio-economic ravages of covid-19 are on national and state funding, as WSU's Chase Billingham has laid out at length. As our government is obliged to re-allocate, delay, or just plain cut from the budget money for all sorts of urban basics--road maintenance, sewer repair, public transportation, and more--the temptation to give into grand plans to attract and hold onto (or at least play-act at attracting and holding onto) the young, urban, "creative" population which has been largely departing Wichita for decades, plans that would carry with them massive future financial liabilities, nonetheless remains strong. The lure of these attractions is great, but we can't let their glimmer distract us from economic realities.

At the heart of that reality is, quite simply, that Wichita, like so many other mid-sized cities, is over-built and, I would argue at least, under-taxed for the size of the obligations it carries and the street and private building projects it has had a poor track record of being able to refuse to create TIF districts to subsidize. Too much of our city is, insofar as its urban conception of itself is concerned, essentially suburban--suburbia basically being, in so many ways, a financial black hole which increasingly few cities have been able to avoid. And it is at this point where the choice between Trump and Biden come in.

Trump's distracting attempt to paint Biden's decidedly non-radical promise to restore enforcement of the Affirmatively Furthering Fair Housing provision of the 1968 Fair Housing Act as an action that will destroy suburban eighborhoods and the American dream itself has, it is fair to say, at least one small kernel of truth to it. Basically, the suburban development patterns (to say nothing of the transportation grids which have to be extended to provide access to them, and the electrical lines and sewers systems that have to be built out to support them) is unaffordable without the massive national subsidies, and renewed enforcement of the AFFH would indeed make it somewhat more difficult for single-family-housing dedicated developers to qualify for those subsidies--that is, unless they were willing to build in ways that lend themselves to a little more business density and little more low-income house, which would lead to a little more diversity. This is part and parcel of Biden's whole housing agenda, one of the (to reveal my political biases again) few truly, admirably progressive parts of his campaign. But I don't think that progressivity is what ought to appeal to Wichita voters who might be making up their minds on the basis of the interests of the mid-sized city they and we all live in, much as I wish it might. Rather, it is simply the fact that Biden's plan involves at least some putting on of the brakes; some attempts at re-direction; some focus on changing patterns which are, frankly, bankrupting cities like our own.

I recognize that there is no good reason to embrace utopian urbanist fantasies in regards what Wichita, or any mid-sized city, might be capable of, and not just because the political will for enacting such fantasies are almost certainly going to be absent in such cities. Rather, I don't want to measure Wichita against the standards of a Portland or a Copenhagen or some other urban area deeply committed to fiscal and environmental sustainability simply because most mid-sized cities, almost by definition, do not have access to the kinds of (usually globally-defined) flows of revenue and investment and talent which, absent a total socialist revolution and the establishment of agrarian autarkic communes, we all need in order to generate the jobs and goods and productivity that keeps us out of poverty and makes for the education, health care, and entertainment which cities were formed in the first place to provide. After all, if we did have access to such flows, or a more consistent and stronger access to them, Wichita wouldn't be mid-sized; it would be Oklahoma City or Dallas or Denver or something even larger. In other words, the material basis for thoroughly urbanist alternatives is probably not within our reach. That doesn't mean that we abandon all hope to wean Wichita away from the suburban pattern; of course we should keep at it. But we keep at it with a more inclusive urbanism in mind; a recognition that, sometimes, suburban economic development is the only economic development which the city may be able to attract, which means, consequently, nudging that development through state intervention and zoning reform, such as Biden's plan suggests, might be the best solution available, even if it doesn't change the nature of the problem.

I don't imagine that my arguments here will change the minds of anyone (especially since anyone actually reading this is likely to be the sort of person who has already voted anyway). And I genuinely don't mean to express any disrespect to anyone who looks at the Trump-Biden contest and sees only, as I said, a desperate struggle over judges, foreign policy, election security, or tax policy--disagreement, perhaps, but not disrespect. Every citizen votes for their own reasons; that's just the bottom-line of living in a pluralistic democracy, which even Wichita, amazingly enough, still is actually a part of. I just want to insist that, if you truly think about what matters to Wichita, then you can see one candidate--Joe Biden--actually talking about taking executive actions that could help move the developments of a struggling mid-sized city like Wichita in the right direction (to say nothing of how Biden is much more likely to directly move towards providing desperately needed pandemic aid to cities like ours), and you can see another candidate--President Trump--talking in ways which simply entrench the same fiscally ruinous, as well as socio-economically and racially paranoid, patterns which Wichita already has too much of (and don't forget that Trump's promises to cities struggling with covid-19 costs has been far from encouraging). It's not that everything else is a distraction--but it is the case that, if you live in Wichita, and are therefore beholden to the financial predicaments and development patterns which consume our city, then not being distracted from the systemic struggles which face mid-sized cities like our own, and recognizing that, in however small a way, your vote for president might do something about it...well, that would be, I think, a good thing.